Have you ever made a phone call or sent a text while behind the wheel?  Have you eaten a quick dinner, checked directions on a map, broken up a fight between the kids, reached for something in the backseat, or continued to drive while struggling to stay awake?  Whether it’s you, your teenager who just started driving, or a friend who constantly seems frazzled behind the wheel, listen up.  You may be able to save a life. 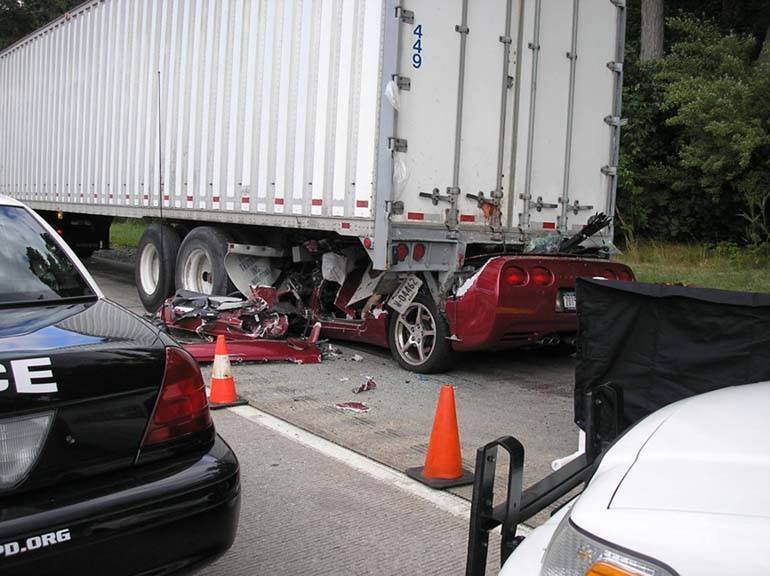 The authorities found that the driver of the red car still had his cell phone in his hands...

Distracted driving is the leading factor in car crashes or near-crashes, according to the National Highway Traffic Safety Administration (NHTSA) and Virginia Tech Transportation Institute.  We have not yet entered the age of autonomous vehicles for everyone (see previous blog post) – and in our current state of affairs, driving requires visual attention, manual stability, and mental focus.  The three main types of distraction are “visual – taking your eyes off the road,” “manual – taking your hands off the wheel,” and “cognitive – taking your mind off what you’re doing” (Michigan State Police).  Texting requires visual, manual, and cognitive attention, so it is considered the worst distraction (U.S. Government).  Consider this – if a driver is traveling at 55 mph and takes their eyes off the road for the average five seconds it takes to text, that driver has covered the length of a football field – blindfolded.

The NHTSA reports that “at any given daylight moment across America, approximately 660,000 drivers are using cellphones or manipulating electronic devices while driving.”  Young (and less experienced) drivers between age 16 and 24 have been observed using electronic devices at a higher rate than older drivers.  10% of teenage drivers involved in fatal car crashes were distracted at the time of the crash – a larger proportion compared to any other age group of drivers involved in a crash.  According to the NHTSA, in 2014, 3,179 people were killed and 431,000 were injured in car crashes involving distracted drivers.

During April, which was designated National Driver Awareness Month, Macomb County received a grant to step up patrols.  Their distracted driving enforcement campaign resulted in 181 drivers pulled over and 93 citations issued.  This was over just a five-day span in mid-April (“Nearly 100 citations issued in distracted driving campaign,” 2016).  Police officers targeted Hall Road between Romeo Plank and Garfield, where many collisions have occurred.  Drivers who were pulled over were warned about the dangers of distracted driving, specifically using a cell phone to call and text while behind the wheel.  Texting and driving has always been a bad idea, and it’s been officially illegal in Michigan since 2010.

Some distractions (like kids fighting in the backseat) may be difficult to anticipate or control, but most of the time you can make a choice to avoid distraction while driving.  Put your phone on silent and in the backseat so you won’t be tempted to check it or use it (even at a red light).  Pull over if you are falling asleep or need to check directions.  Avoid eating or applying makeup while driving.  And pay attention to the drivers around you, because even if you are doing everything right, someone near you may be distracted and you or your car could suffer for it.

Take a few minutes to honestly ask yourself, “What bad habits do I have that result in taking my eyes off the road, my hands off the wheel, or my mind off what I’m doing?”  Then ask yourself how you can eliminate those bad habits.  You may save your life, prevent injury to yourself or others, save yourself the cost and inconvenience of visiting a collision shop, or just avoid getting a ticket.  Those are all good things – and better than sending that text message anyway.

For more information and to educate yourself about the dangers of distracted driving, check out these sources (and share them far and wide with others!):

By Lea Wojciechowski Ross, Blogger for Dotten Collision ~ August 25, 2017 On August 19th, more than one million visitors and more than 50,000 out-of-the-ordinary vehicles graced the lanes of Woodward Avenue (Facebook, 2017). The...
Read More...

Be a defensive driver, not an offensive one

By Lea Wojciechowski Ross, Blogger for Dotten Collision ~ April 26, 2017 I once heard that police officers are the best drivers not so much because they know how to drive well, but primarily because they are so trained to look out for the...
Read More...

Let it snow… and let your driving keep you safe

By Lea Wojciechowski Ross, Blogger for Dotten Collision ~ December 24, 2016 Our society doesn’t do so well with silence.  We often measure ourselves and others in terms of what we do and what we get done – we value...
Read More...

The true meaning of Christmas (hint: not today’s culture of gifts galore)

By Lea Wojciechowski Ross, Blogger for Dotten Collision ~ December 19, 2016 Today is December 19… 6 days till Christmas.  It’s coming up, and there’s still so much to do… a thought that comes along with the...
Read More...

By Lea Wojciechowski Ross, Blogger for Dotten Collision ~ November 22, 2016 Thanksgiving is a holiday with a different kind of focus.  Without the obligatory gift-giving, without the fanfare of party after party after party, we are able...
Read More...

Get educated and choose your collision shop... before your insurance company does

By Lea Wojciechowski Ross, Blogger for Dotten Collision ~ July 14, 2016 The last time you got into a car wreck, whether it caused significant damage or just a fender bender, did you know which collision shop you were going to go to?  If...
Read More...

By Lea Wojciechowski Ross, Blogger for Dotten Collision ~ May 13, 2016 Do you want your business to grow by leaps and bounds?  Do you want to be better known and more trusted than your competitors?  Are you looking for a new...
Read More...

Get ready to sip wine, read a book, and sleep on your evening commute

By Lea Wojciechowski Ross, Blogger for Dotten Collision ~ April 19, 2016 What is the future of automobile safety, the frequency of collision, and the activity of people while they’re in the car?  The answer may shock you and...
Read More...

We've added great new features and updated our content to bring you the most up to date information about our company.  Check back often for updates.
Read More...
Free
repair estimates All Makes & Models
24/7
collision towing 586-709-1998
All Insurance
Accepted
Free
Estimates